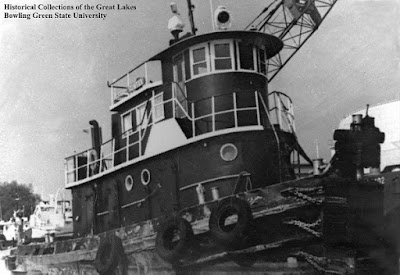 The Barbara Lyn was originally lost on October 1st, 1990 about 12 miles north of Pte. Aux Barges in a storm.  The tug sunk in about 208 feet of water.  In 2014, a salvage attempt was made on the tug and the tug was successfully raised to the surface.  However, once brought to the surface the tug was grounded off of Port Austin as a storm and bad weather moved in.  The subsequent storm destroyed the pilothouse and re-sunk the tug in 20 ft of water. 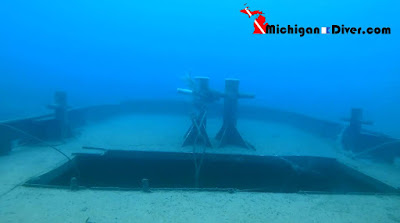 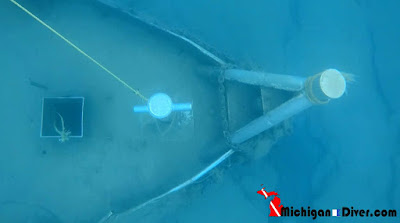 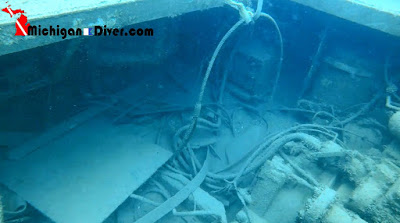 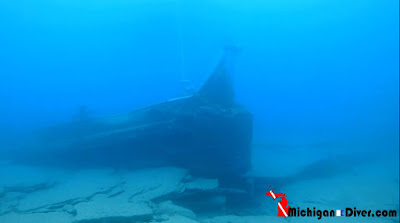 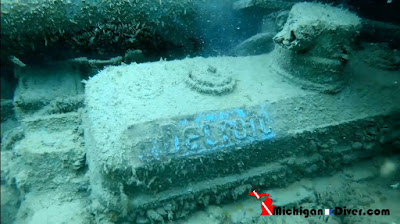 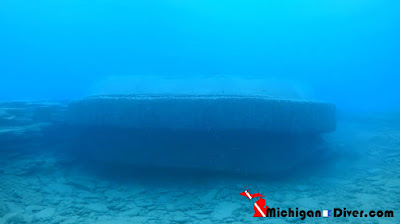 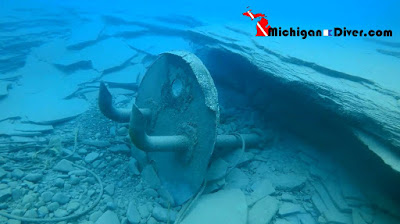 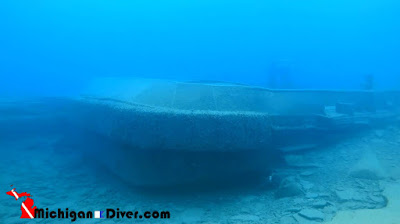 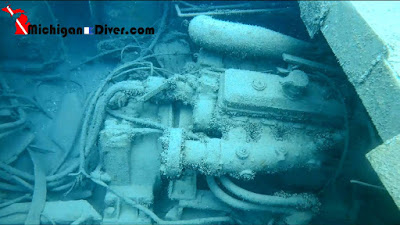 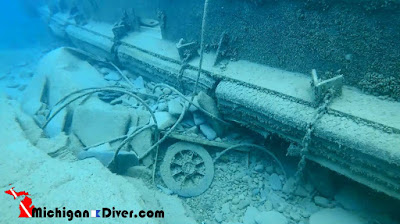 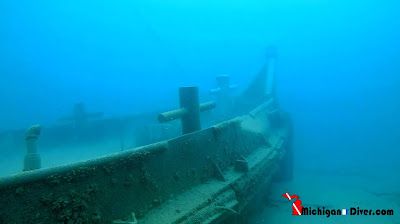 Michigan Divers, LLC announces the discovery of a previously unknown shipwreck, near the Grindstone City Harbor.  Captain Cindy Lynch, her husband Captain Mike Lynch and Kevin Jimkoski were scuba diving from shore and discovered the wreck site.  It was initially believed that the wreckage was from the Tug Margaretta, which exploded outside of the Grindstone Harbor in 1907.  On a recent dive, Cindy, Chris Roth, and Kevin further explored the site and it was determined that the wreckage was not from a tugboat but from a small, single-masted sailing vessel.  After consulting with local historian and marine artist, Robert McGreevy, it was determined that the wreckage was likely from a “Mackinaw Boat,” which was common for the area, around the end of the 19th century.  The small sailing vessel was of “double-end design” and had at least one mast, a drop centerboard, and a tiller.  The wreck site lies within the boundaries of the Thumb Bottom Land Preserve and can be found in 8 ft of water, approximately 150’ due east of the end of Grindstone City short point.  People exploring the site can expect to find many small artifacts and several different fish species.  This site should be an excellent local attraction for beginning divers, snorkelers, and kayakers.

Posted by Michigan Diver LLC at 11:49 AM No comments:

JACOB BERTSCHY - 10 Feet Deep.  The Jacob Bertschy was lost in a storm on September 3rd, 1879. It grounded with 51 crew and passengers (everyone was saved) and a cargo of shingles and wheat. The Bertschy was a wooden steamer built in 1867 in Sheboygan, WI, and was 138 feet long.

Today the Bertschy sits in only 6-8 feet of water and is a possible shore dive (very long swim) out of Grindstone City Harbor or is reachable by boat for snorkeling or scuba diving.
June 2021
There seems to be very little available or published in terms of a photo of the Jacob Bertschy or images of the wreckage.  Capt'n Cindy decided it was time to change at least the lack of underwater images of the Jacob Bertschy wreck site.  Initially, the wreck site of the Jacob Bertschy was listed as a shore dive from the Grindstone Marina.  As we investigated the location of the wreck site, it was determined that it would be a long swim from shore to the reported location.  Cindy rightfully opted to perform the search with her DiveX Pirahna DPV (Dive Propulsion Vehicle) or commonly called dive scooter.
Scootering out toward the believed wreck location, Cindy was able to find scattered remains of the vessel indicating she was headed in the right direction.
Continuing the search, additional pieces were found.
Finally, after additional searching of the area with the DVP, Cindy found the largest piece of the Jacob Bertschy wreckage, the keel.  A photogrammetry model was created from the footage gathered to better understand how the wrecksite looks today.
After many years on the bottom of Lake Huron, the wind, waves, and have broken up the wreck and scattered the debris across a large bottomland area.  Much of the keel is now buried in the rock and gravel and the wreckage sits embedded and even with the bottom contours. 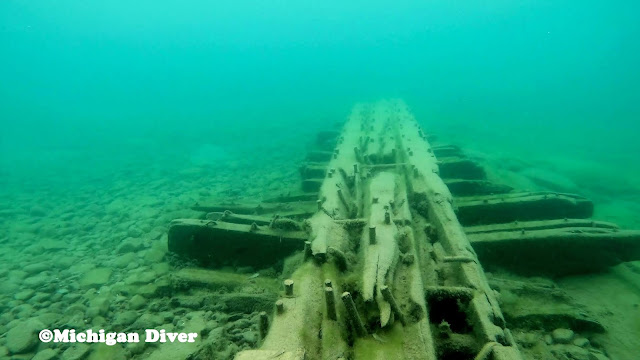 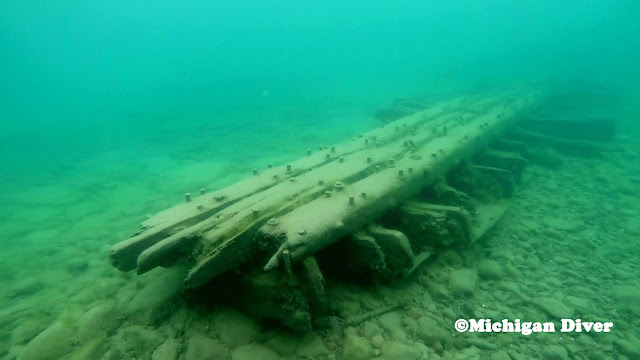 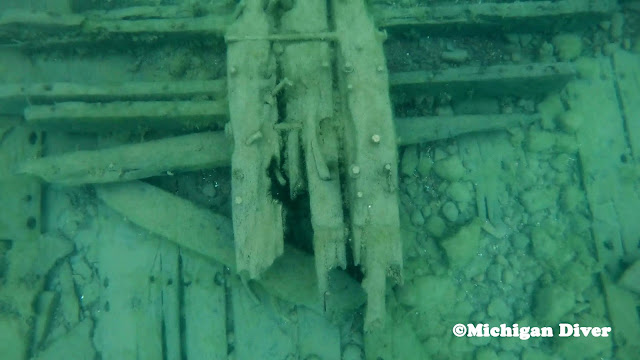 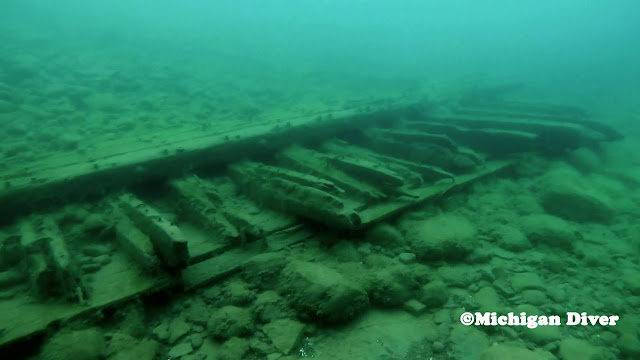 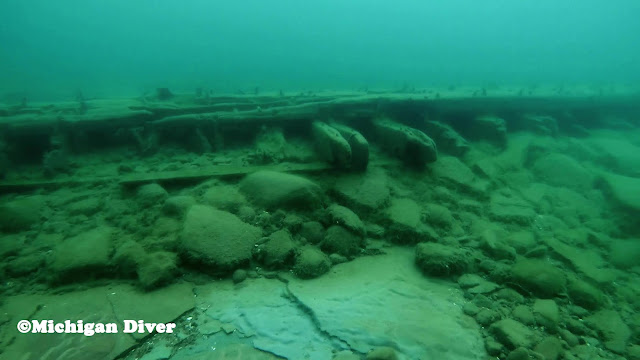 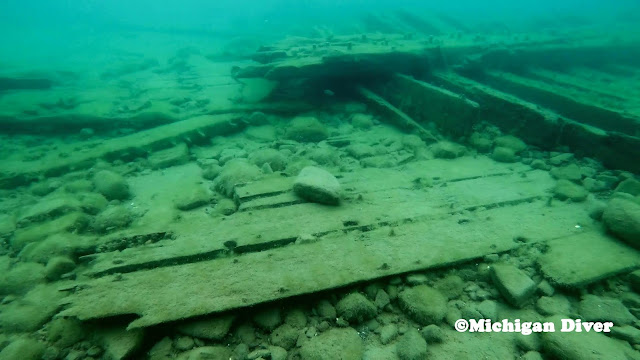 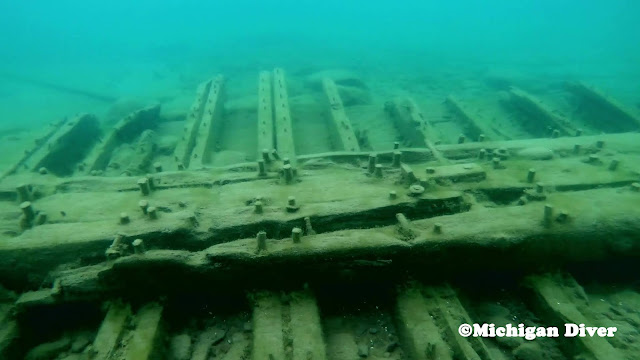 The Jacob Bertschy wreck site lies within the Thumb Area Bottomland Preserve.  As mentioned previously this is probably a site best enjoyed from a boat.  The swim from shore is rather long!
Posted by Michigan Diver LLC at 9:54 AM 5 comments: 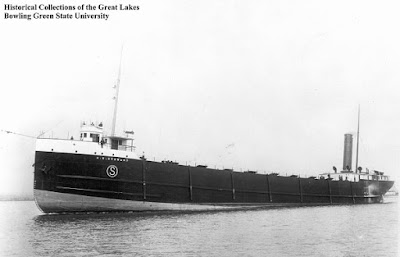 GLENORCHY - (N43.48.580 W.082.32.721) 100 to 120 Feet Deep.  The Glenorchy is a steel freighter that collided with another ship on October 29th, 1924.  The Glenorchy is 365 feet long and sits "turtle" (upside down) in 120ft of water.  For the properly trained and experienced diver there are penetration opportunities on this wreck.
October 29th, 1924 the steel freighter Glenorchy collided with the Leonard B. Miller in heavy fog on Lake Huron about 6 miles off of of Harbor Beach Michigan. After the impact the Miller came alongside the Glenorchy to take on the crew of the sinking ship. One story from the sinking is that one of the crew members was trapped in his stateroom after the collision. Captain Burke of the Glenorchy realized this as the crew was being transfered to the Miller. Captain Burke then when to the stateroom and used an axe to chop his way into the stateroom and rescue the trapped crewman. Moments after Captain Burke and the crewmen stepped on the deck of the Miller, the Glenorchy turned to its port side, then rolled over and sand to the bottom.
After taking on all 20 crew members, the Miller returned to Port Huron with a badly damaged bow and a large hole in its port side. It was reported that the pumps were barely able to keep up with the incoming water from the damage. 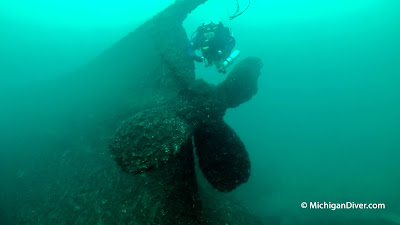 Chris Roth inspecting the prop on the shipwreck Glenorchy 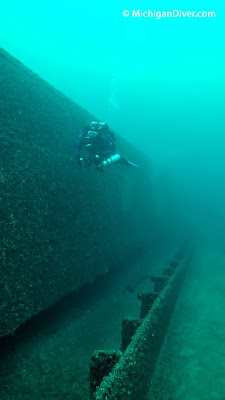 The Glenorchy lies upside down on the lake floor. 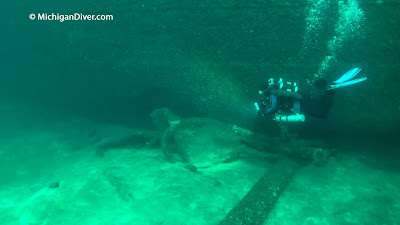 Debris lies around the shipwreck Glenorchy. 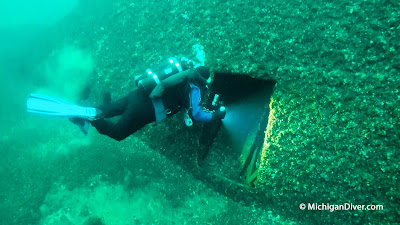 There are openings in the stern hull that lead to a mangled engine room.  Divers need to take care (and properly trained) if penetrating as there are many entanglement hazards inside the wreck. 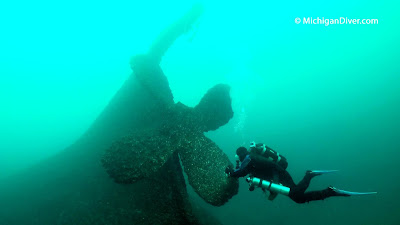 The propeller is always an amazing site.  The size of the prop is impressive when compared to the diver next to it (Chris Roth)
Posted by Michigan Diver LLC at 9:53 AM No comments: